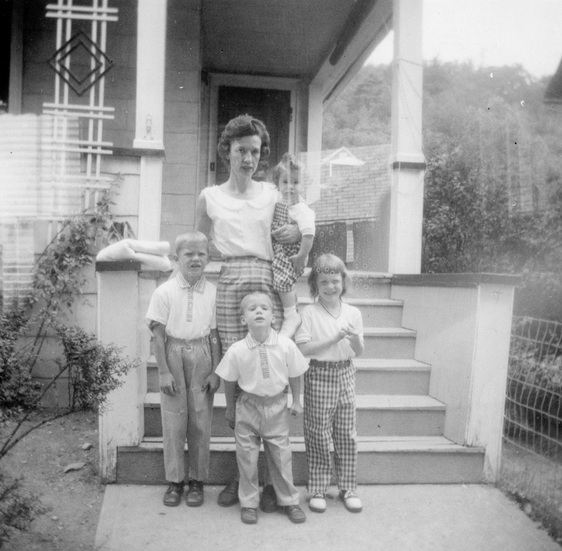 That's us in the photo on the right.  Taken by our dad in front of our house at 26 Franklin Street about 1959, probably around Easter. I can say that because my brother and I are wearing identical shirts and my sisters are wearing the same pattern jumper and slacks. This was something our mom did every spring, buy or make new outfits. I'm not yet 8 years old, standing on the left. My brother, about 4 years old, is standing in front and my sister, about 6 years old, is on the right. Our mom is holding our sister, who is about 2 years old in this picture. Our mother is about 32 years old. Our mother had lived in this house with her parents as a young girl before she married our father. Her mother and father - Harriett and Forrest Wood - bought this house in 1933. Our mother and father bought this house from her mother, Harriett, in 1957, although we had been living there from at least 1953. Our father had lived for several years with his mother and father just down the street at 33 Franklin Street. In 1944-45 dad's mother and father - Ralph and Ruth Wheeler -  lived in this house, renting from mom's mother, Harriett.

Behind the house we had a 3 stall garage and a small yard. You can't see that here. Our mother grew vegetables and flowers; roses and peonies and hydrangeas. Our parents rented out part of the garage. I can remember men coming to the house in the evening to pay the rent, our mother writing out a receipt and making entries in a book, sitting at the dining room table.
This picture was made before  all the homes on Prospect street were torn down to build Route 17 (now called I 86).  I can remember the construction  in the early 1960's, before our family moved to North Carolina. Mom and dad lost the garage and part of our back-yard to eminent domain when New York State took the land. They finally sold this house about 1977 and moved to Matthews Street on the West Side.
Powered by