Where does Lehigh, Iowa fit into the story that is the Wheeler family from Binghamton, New York?  Lehigh, Iowa has something to do with George Wheeler.
George R. Wheeler was our great-great grandfather, the son of Royal and Delanah Wheeler, born about 1835.

Following George Wheeler in the Federal and State census records turns up an odd and interesting entry. In 1880 George Wheeler, his wife Jane and six children are listed in the census for Lehigh, Webster County Iowa.

What was George doing in Iowa? He had been born in Pennsylvania, fought in the Civil War with the 56th Pennsylvania volunteers, married a distant cousin from Pennsylvania. The 1865 New York State census lists George, Jane and son Clinton living in Sanford, Broome County, New York. ​

He doesn’t show up in the 1870 Federal census, at least not with Jane and Clinton; and neither do Jane and Clinton.
But George had been wounded during the war and was receiving a disability pension. His pension records show that he was living in New Baltimore, Wayne County, Pennsylvania in 1873, and in 1877 he was requesting an increase in his pension at Susquehanna, Pennsylvania.

​In 1883 he made another request for a pension increase while living in the town of Scott, Wayne County, Pennsylvania.
​ 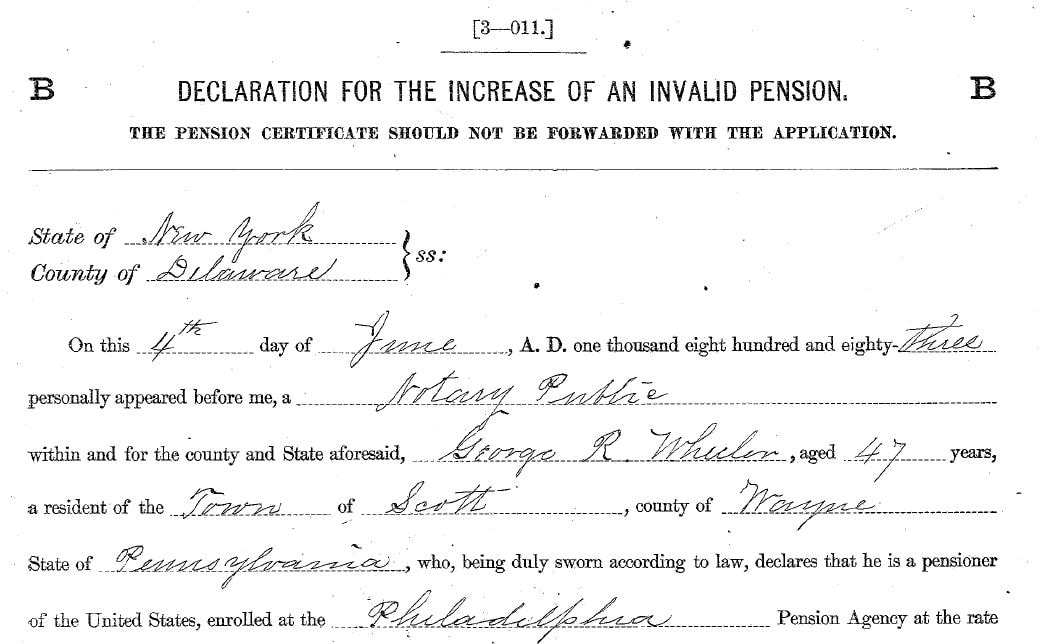 ​Sometime between 1877 and 1883 George moved, with Jane and their children, to Lehigh, Webster County, Iowa and back again to Pennsylvania. George and Jane’s son Earl was 4 months old at the time of the census in June 1880. He is listed as having been born in Iowa. so they had been there from, at least, January 1880.

Why? We will probably never know for sure. All we can do is put a few facts together and come to some speculative conclusions.

Orin was almost certainly the son of Joseph Wheeler (listed as Owen in The genealogical and encyclopedic history of the Wheeler family in America, page 776):

Joseph Wheeler was Ebenezer Wheeler’s brother and George’s great uncle. Jane, then, was George’s second cousin as well as his wife and the mother of his children.

Orin Wheeler was also living in Iowa at the time of the 1880 Federal census. He is listed living with his wife Margaret with their son Addison, Jane’s brother.

This census was taken in Sumner Township, Webster County, Iowa, the same township where Lehigh is recorded.

Orrin, Margaret, Addison, with his wife Hannah and son Clarence, are back in Susquehanna, Pennsylvania in the 1900 Federal census. Addison is listed as an engineer at a saw mill.

The move to Lehigh, Iowa may have been centered on Orrin’s family and the group moved as an extended family unit. Orrin, Addison and George are all listed as laborers. Other men listed in the same census are identified with particular occupations (dry good store, livery stable, dress maker, grocery clerk), so I will assume that a listing for laborer implies unskilled labor.

What opportunities were available in Lehigh?
The history of Lehigh, Iowa gives clues to possibilities about George’s move to Iowa. Lehigh was settled on the Des Moines river.By 1870 the town had a saw-mill and several coal mines. Railroads were expanding in the 1870’s and railroad companies had been granted land rights by the Federal government. The companies advertised the rich opportunities available in the midwest and sold land to settlers to to raise money. By 1878 there was a railway link to Chicago, via the famous Rock Island line through Davenport Iowa.  An 1881 map of the railroads active in Iowa show Lehigh situated between the Illinois Central RR at Fort Dodge and the Chicago and Northwestern RR passing to the south at Dayton.

“The Ft. Dodge Coal and Mining Company opened a mine in Webster county in 1870. The president of the company was J. L. Platt, and superintendent, Thomas Fleming. The mine was located on Holiday creek and about three miles south of the Illinois Central railroad. They built a tramway the entire distance, utilizing mule power in delivering coal to the road. After a few years of prosperity, it became subservient to the company's interest to widen the track and substitute steam power for that of mule, as the latter was inadequate. The Duncombe and Richards mine was opened in the latter part of 1870, by J. F. Duncombe and Mr. Richards. In 1871, W. C. Wilson, of Webster City, opened a mine at Lehigh, and subsequently formed the Crooked Creek Coal and Railroad company.”
Thomas, Morgan. "Pioneer Iowa Coal Operators." The Annals of Iowa 33 (1955), 118-127. Available at: http://ir.uiowa.edu/annals-of-iowa/vol33/iss2/3   http://ir.uiowa.edu/cgi/viewcontent.cgi?article=7389&context=annals-of-iowa

“A later news article in the Hamilton Freeman of January 10, 1877, reported that the original intent was to put down a wooden track, costing not over $5,000 per mile. This idea was soon abandoned, and instead a narrow gauge line of fish-plate iron was laid over the nine-mile route. A town was laid out at each end of the line. The junction with the main line was called Judd (for J. H. Judd), and Lakawana was the name given to the southern terminus. The newspaper account continues by describing Judd as having a good depot, telegraph office, and 57 acres of land on which people were encouraged to settle. Lakawana (now Lehigh) was reported to have only one dwelling on October 1, 1875, but by January 10th boasted 35 houses, stores, shops, a hotel, and mills. About 100 miners had been hired to work the mines. To transfer the coal, the Illinois Central laid a track parallel to its main track but elevated above it. This was necessary so that the narrow-gauge coal cars would be at the same level as the standard gauge cars. A "Wye" was constructed that allowed the Crooked Creek train to travel north, take a curve west, then back up parallel to the Illinois Central. Men were hired at 10 cents per hour to shovel the coal from the Crooked Creek cars to the Illinois Central cars. After the cars were unloaded, the train backed up until it cleared the "Wye" and then took a curve back south to Lakawana.  At first, the tracks stopped at Chance and McClure Mines on the east side of Lakawana. The depot was located in a large brick building south of a wagon bridge across the Des Moines River. In 1879, a 370-foot wooden bridge spanned the river and provided access to the Crooked Creek mines.”  https://sites.google.com/site/hamiltoncountyhistory/home/newspaper-articles/crooked-creek

The period described above coincides with the time frame of George and Jane’s move to Iowa.

“The village of Lackawanna was plotted in July 1876 by the Crooked Creek R.R., and Coal Co. It was located on the East bank of the river. The village on the West Side of the river was now called "Vesper". Coal miners from Pennsylvania were responsible for the name "Lehigh".”  http://genealogytrails.com/iowa/webster/county_history.htm

​Sawmills were established in the mid 1850's on the west bank of the Des Moines river at a place called Vesper, or Tyson's Mill, which became part of Lehigh in the 1870's.  Coal miners settled a town called Lackawanna - after Lackawanna, Pennsylvania coal country - in the late 1870's. This town became part of Lehigh on the east bank of the Des Moines river.

The United States was in the midst of a general economic depression, called the Long Depression, lasting from the Panic of 1873 to, at least, 1879, with some longer effects not relieved until the 1890’s.   “in the United States, nominal wages declined by one-quarter during the 1870s,[13] and as much as one-half in some places, such as Pennsylvania.” (wikipedia)
​
George is listed as a laborer in the 1880 census. We don’t know what George labored at, but there was work and the ability to move that distance with relative ease.  Why and when George made the move to Iowa and back will probably never be known for sure.
We might assume, by these facts, that these Wheelers moved to Iowa for opportunities for work, but that these were not so successful and they returned to Pennsylvania. 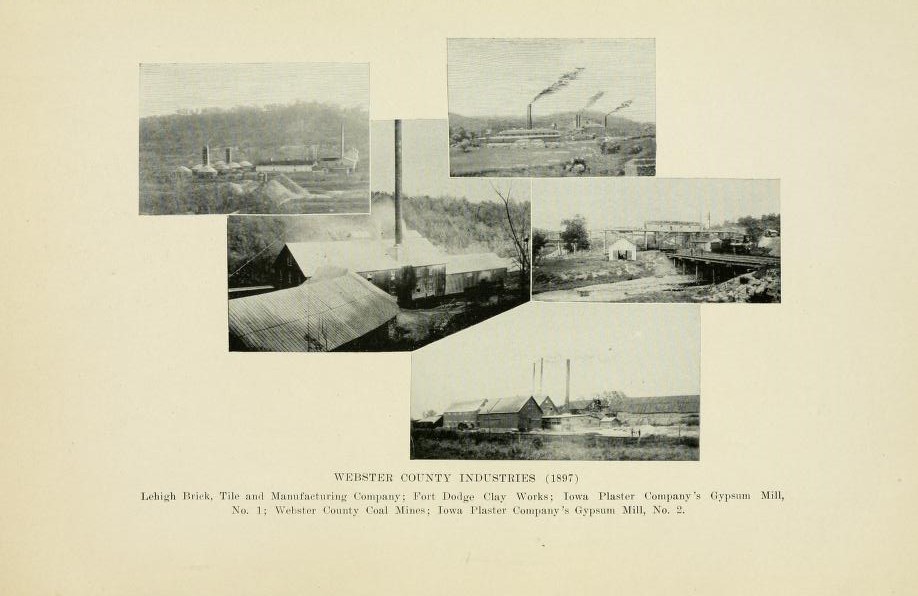