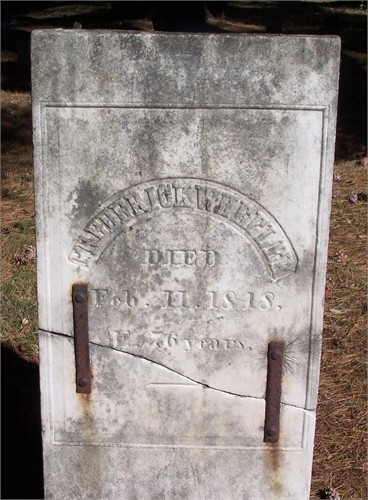 Frederick Wheeler gravestone in Hancock, New York
The Genealogical and Encyclopedic History of the Wheeler Family in America , by Albert G. Wheeler, states that Frederick Wheeler moved from New London, Connecticut to Hancock, New York about 1800. Frederick is the father of Royal Wheeler who is the father of George Wheeler, the father of Clinton. Frederick is our great, great, great, great grandfather.
Birth records for Frederick's children in Montgomery, Massachusetts show that he did not move to Hancock until after the birth of his daughter Clarinda in 1802. These records also suggest - but don't verify - that Frederick and his family moved to Hancock from Montgomery and not from New London, Connecticut. Montgomery is a township in Massachusetts along the Westfield River, over 90 miles northwest of New London, Connecticut. What motivated Frederick to move to Hancock isn't known for certain, but he probably moved for an opportunity to improve his life for work or land or both. Another source, quoted below, states that Frederick followed Ebenezer Wheeler to Hancock.
​Hancock, New York is on the Delaware River, bordering Wayne County, Pennsylvania. In 1799 the new  Federal government resolved a land patent dispute between the former colonies of Connecticut and Pennsylvania opening Pennsylvania to emigration and settlement. The Federal government also distributed land grants in New York to former soldiers and several treaties were established with Native American tribes living there. The Delaware River was an important transportation link to ports and markets. Lumber, farming and milling were growing economies along the river.

The Wheeler's apparently thrived in and around Hancock.  The passage below is cited from: Delaware County, NY Genealogy and History Site
The History of Delaware County, by W.W. MUNSELL 1797-1880
THE TOWN OF HANCOCK
Electronic text by Sharon Wilson and John Hope
http://www.dcnyhistory.org/books/munhank.html

"PARTRIDGE ISLAND AND ITS PIONEERS
This is an old lumbering and farming hamlet, some six or eight miles above Shehocken, on the east branch [of the Delaware River]. Ebenezer Wheeler came about 1792 from Massachusetts.  They [next] located at the mouth of Sands creek near Shehocken, and in 1798 we find them at Partridge Island. Here the Wheeler brothers settled and married,
Several other Wheelers. relatives of the former, also came to Hancock early from Massachusetts. Frederick Wheeler, father of Marvin and Royal Wheeler, first settled near Knight's, below Shehocken, and then went to Partridge Island. Marvin Wheeler married Emily, daughter of Captain Conrad Edick, of Deposit. He left two sons, Frederick and Marvin D. One son, Clinton, had died before the father, and two daughters unmarried. Royal Wheeler, a brother of Frederick, came to Hancock at the same time. He had two sons, Earl and Royal, the former a distinguished lawyer at Honesdale, Pa., now deceased. One James Wheeler was known as "Fiddler Jim," to distinguish him from the other James, who was called "Tailor Jim." Little is known of his history. One Joseph Wheeler was known as "Hatter Joe," while the other was called "Innocent Joe." John Wheeler, cousin to bachelor John, after residing for some years at Partridge Island, removed to or near Barryville. "

Ebenezer Wheeler and Frederick Wheeler may have been first cousins. William Wheeler (1739-1782), who may have been Ebenezer's father,  and Frederick's father James (1749-1828) were brothers, the sons of Ephraim Wheeler and Mary Topliff. Ebenezer and Frederick may also have been first cousins on their mother's side. Ebenezer's father William (1741-1782) married Hannah French (1750-1792). Frederick's mother was Thankful French (1752-1841), Hannah's younger sister. Thankful was married to James  Wheeler (1749-1828).  Delanah Wheeler, wife of Frederick's son, Royal, may have been the daughter of Ebenezer and Harriet Wheeler. This would make Delanah and Royal cousins.  I still have to find documentation to verify this.

Frederick's and Ebenezer's move to Hancock was one of a series of events that brought into geographic proximity the Wheeler and the Wood families.
About 35 miles downriver and across the Delaware River from Hancock, New York is Boyd's Mills in Wayne County, Pennsylvania where the Wood family settled beginning about 1837 and worked successfully in the lumber trade. This alignment of people and place increased the possibility for the two families to cross paths, which they did one hundred years later in Binghamton, New  York.  Frederick's son, Royal, married his second cousin Delanah Wheeler. She is the daughter of Ebenezer Wheeler and Harriet Foster Wheeler. Royal and Delanah's son, George, is the father of Clinton; Clinton first moved to Binghamton sometime in the 1880's.
Ebenezer, John and his wife Sopronia (Sophia) and James Wheeler are buried in the Partridge Island cemetery just outside of Hancock, New York.  Frederick , his wife Mary, Delanah, Ebenezer's daughter, and several other Wheelers are buried in the small Old Village cemetery at the Presbyterian church in Hancock, New York.

The Genealogical and Encyclopedic History of the Wheeler Family in America , by Albert G. Wheeler, Boston: American College of Genealogy , 1914.
Online at Internet Archive.org

The History of Delaware County, by W.W. MUNSELL 1797-1880
THE TOWN OF HANCOCK
Electronic text by Sharon Wilson and John Hope
http://www.dcnyhistory.org/books/munhank.html

Vital Records for Montgomery, Massachusetts    Scanned and available online at Archive.org
​Extract from letter of Thomas Young to his cousin Harriet Wheeler.

“I was at work on a house  at the river, and happened to look out of this window  about 11 o’clock yesterday, and saw just after they had forded the river, (Delaware).  Uncle Nathan [Mitchell, 1805-1887]*, Aunt Delanah [Wheeler, 1805-1865], Aunt Harriet Wheeler (Dickinson) and Uncle Ransom [Wheeler, 1801-1877].
Two men were standing by the wagon talking with them.  They were Milton [Wheeler, 1808-1892] and Ebenezer F. Wheeler [1827-1909].  They all came in company with Uncle, and then we all came up to Uncle George [Downs Wheeler, 1818-1906]  (except Ebenezer), Aunt Emalinda [Wheeler, 1807-1861] was so poorly she did not feel able to come.  But today Uncle Nathan brought her up.  Yesterday we sent out for Uncle John Mitchells folks [1801-1856], and while I am writing to you, I can hear the hum of voices down stairs.
All that remains of Grandmother [Harriet Foster] Wheeler’s children are here today – five sisters and one brother.  Delanah, Harriet, Emalinda, Hannah, Almira and Ransom.  It is not at all likely that it will ever happen again.  This is the first time they have all been together since Heather was married 36 years ago.  Uncle Ransom moves about among his worshiping sisters a perfect lion.  It would do you good to see some of  the warm hearted greeting he receives.”

* Information in [  ] brackets was added by R. McClure while transcribing material. Retrieved from Ancestry.com, entry for Delanah Wheeler. 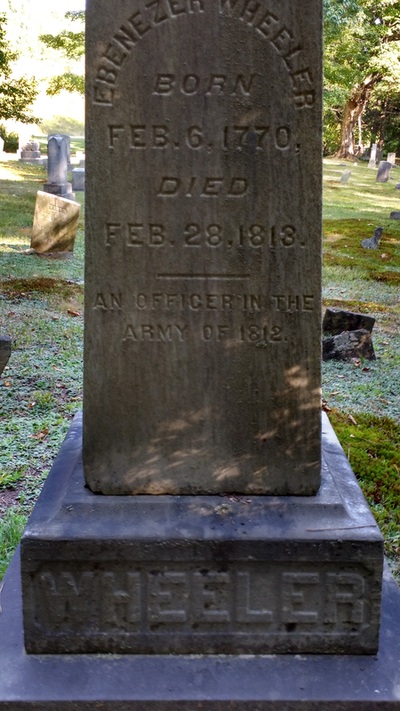 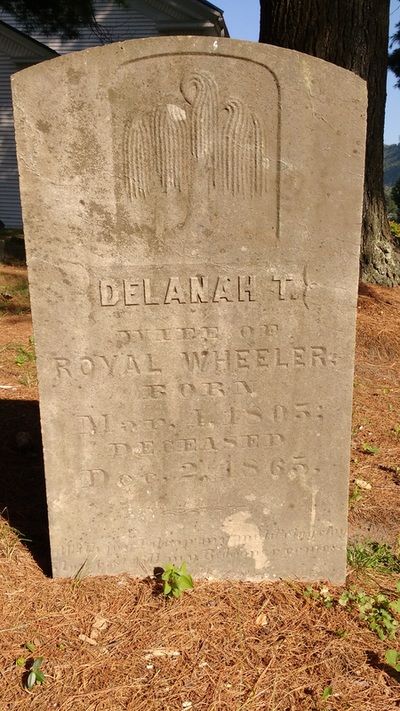 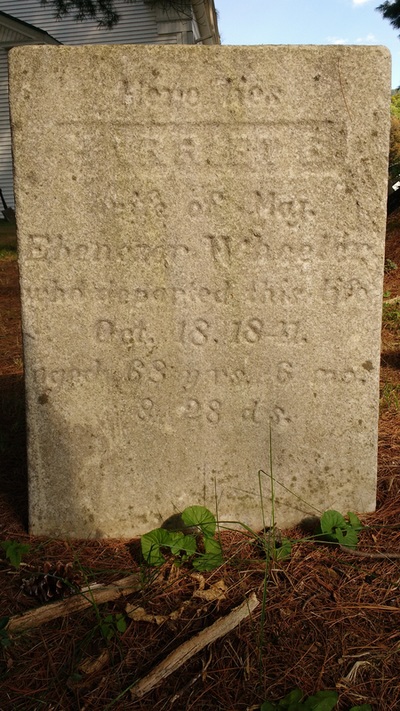 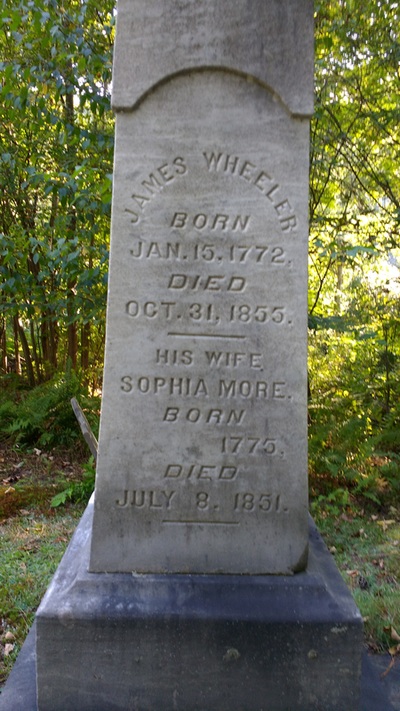 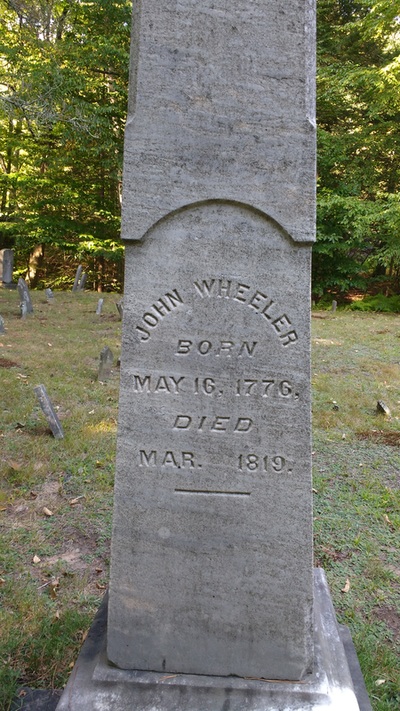 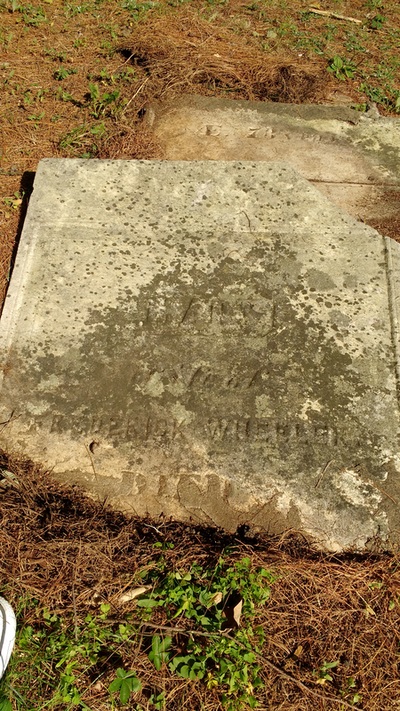 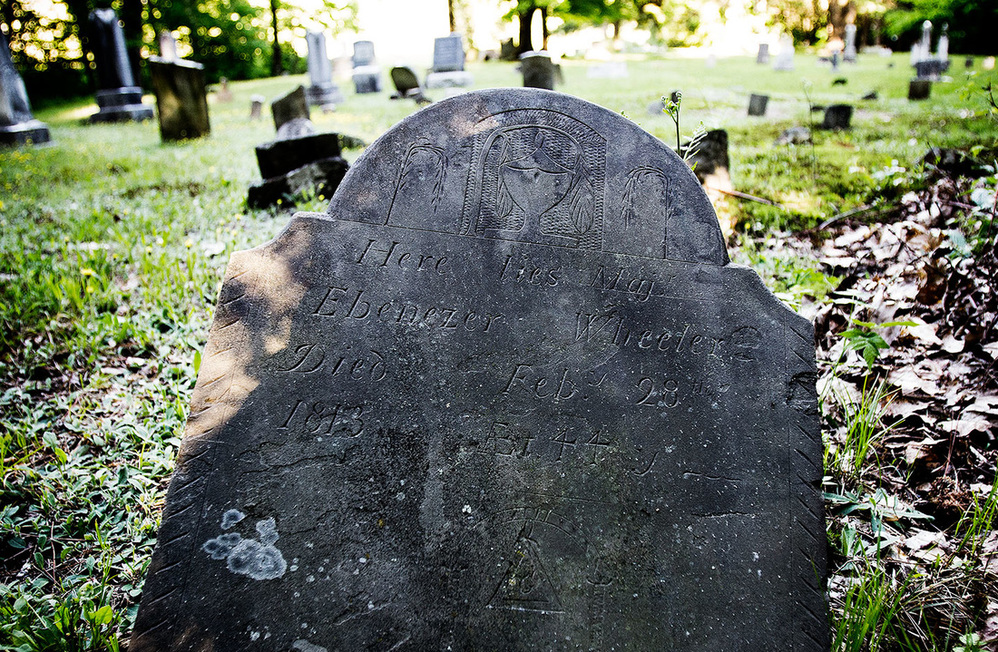 Ebenezer Wheeler's gravestone at Partridge Island cemetery along the East Branch of the Delaware River.
Powered by